1. Shwedagon Pagoda – the most impressive of Yangon’s historical sights and a must for

all travellers to the city. It is also recognised as the most sacred Buddhist shrine for the people of Myanmar so it attracts plenty of locals as well as tourists. Give yourself plenty of time to walk round the central golden Pagoda and the hundreds of other statues and stupas that surrounds it.

We went around an hour before sunset so we got to see the Pagoda in the sunlight and then as it changed as the dusk began to fall and all kinds of light started to reflect off its gold surface.

You do need to be appropriately dressed – no bare shoulders or short pants and you’ll need to walk barefoot. As always, we were in our shorts and tanktops but they let us hire out some clothing.  Oh and there also 4 main entrances / exits (North, South, East & West) so just make a note of which one you enter as you could get lost as we did!

2. Bogyoke Aung San Market – sometimes also known by its former British name Scott Market. Most of it is covered but there are also shops in surrounding streets. With over 2000 shops and you’ll find a good selection of Myanmar local crafts from laquerware and paper umbrellas to jewellery and local textiles. 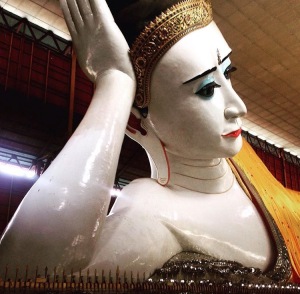 3. Chaukhtatgyi Buddha Temple – where you find the “Big Reclining Buddha”.  For some reason, it is much less crowded than all the other sights in Yangon and when we went, there were only a handful of others visiting the temple – all locals. I’ve seen other reclining Buddhas, especially in Bangkok, but there is something breathtaking and mesmerising about this one – perhaps its the stare of the Buddha eyes or the bright make up that has been painted on its face. But you literally can’t take your eyes off it.

Our Top 3 eating & drinking in Yangon

Read more travel diaries from our time in Yangon and Bagan